This is the first in a 3-part blog series exploring the world of quantum technologies and its impact on semiconductor packaging.

With the rapid advance of digitization, the world is becoming more and more dependent upon the secure communication of data. With autonomously controlled cars, and even jet fighters, not to mention remote robotic surgery in the distant future, dependable and secure takes on an even higher order of magnitude. Currently this happens through classical encryption protocols, which essentially create very difficult to resolve prime numbers—analogous to a numerical padlock protecting data as it travels through the Internet.

Figure 1 illustrates the mechanics of how we currently protect electronically communicated data; it is locked in a box with one key (public key) and opened by the intended recipient with another key (private key). The design is such that determining the private key is extremely difficult, even with a corresponding known public key. When we say difficult, we mean potentially taking thousands of years to resolve—even on the most advanced computer.

That having been said, we do not live in a static world.

With such a breakthrough, all these keys, all these prime numbers could be hacked in seconds, perhaps milliseconds. With data controlling so many things, from utilities to vital parts of our transport infrastructure, to national defense, hacking could unleash death and disaster. Unfortunately, even conservative estimates reckon such processing power will be achieved by 2030, thanks to advances in quantum computing. As a result, protecting our security takes a high priority now.

Fortunately, where quantum technologies represent such a threat on the one front, they provide a solution on the other. Quantum key distribution takes 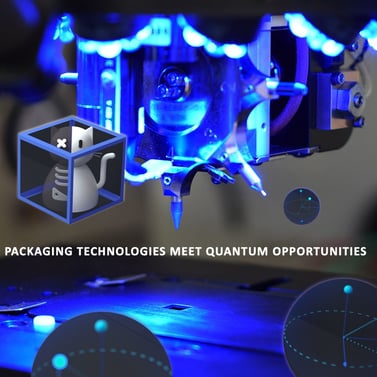 advantage of the laws of quantum physics to create unbreakable encryption. What we mean by this is that anyone who attempts to hack the encryption key is immediately detected—thus the data cannot be transmitted. Without going into detail, the beauty of the technology is that the laws of nature make it impossible to circumvent, however advanced the computing power.

As to what defines the technology as “quantum”, it is the use of single photon detectors, detectors and transmission over dedicated quantum fibers. Single photons possess certain properties that inviolably change if anyone intercepts them. This property guarantees the encryption. Given these amazing characteristics, it might be a surprise the reader to learn that less than ten discrete components can make this device. Indeed, the technical basics are so straightforward that for $3,500 you can buy your very own quantum key distribution (QKD) kit. It is very much larger than a real device and uses line-of-sight rather than fiber for transmission and reception.

As for packaging a real device—then scaling it up for commercial production—the components may be few, but the challenges come as an admixture of good and bad news. The good news is that since they are photonic devices, construction is very similar to high-end optical transceivers. Equally helpful is that there other important technical crossovers with data and telecoms. Most especially this is true in regards to silicon photonics and pursuit of homogenous integration. The speed and energy, by which advances have been made in silicon photonics over the past five years, could not be more advantageous, nor better timed for the advent of quantum key technology.

The bad news is that there are some very difficult nuts yet to crack, if the journey to mass scale commercialization is to be achieved in a timely manner, but there is an unseen benefit. The urgency of the need disproportionally benefits institutes, universities and SMEs working in, or supporting the proof-of-concept, prototyping, development, and all that lies ahead on the road to volume manufacturing. It is a simple fact that QKD technology cannot be put off for the day of easy solutions. Need and China’s substantial lead in the technology has led other governments to adopt aggressive and ambitious support programs. Despite the challenges of COVID, 2020 witnessed a number of well-funded five-year programs worth tens of billions of dollars. Unsurprisingly countries with strong cluster photonics sectors, such as the UK, the Netherlands and Singapore, have taken the lead: or those with strong space sectors such as the US. Thus, India with its successful space program is adapting laterally to drive forward QKD technologies with itself and others.

With a long history in advanced microelectronic packaging, and Innovation Centers in Singapore and Carlsbad, CA, USA along with its Demonstration Lab in South West England, Palomar Technologies finds itself positioned among two of the most globally important clusters driving QKD and other quantum devices. As can be seen in the Table 2, Palomar is also positioned in countries benefiting from the highest levels of per capita investment in this sector. In most Western countries, the investment is specifically designed to bring a synergy between universities, multinationals and SMEs to serve future quantum development. Each participant brings a specialism that benefits the whole, proving the cluster to be greater than the sum of its parts.

In our second blog, we will present aspects of this kind of synergy through Palomar’s work with Dr. Andrew Robertson and Bay Photonics at Palomar’s demonstration laboratory located in the EPIC Center in Paignton, England.