Engaging the Rapid Shift in World-Views

The following blog is the seventh in a series of eight examining Current Trends in the Opto-micro-electronic and RF Packaging Eco-systems, giving readers a glimpse of our shared technological future, as well as insight into Palomar’s evolving business ethos and relevance. This blog deals with the rapid shift in global paradigms or “world-views” and how these impact future commercial engagement. The views represented are entirely those of Dr. Anthony O’Sullivan, Palomar Technologies, Strategic Market Research Specialist. Dr O’Sullivan will gladly field questions and comments.

# 7. Engaging the Rapid Shift in World-Views.

It is a challenge to speak about philosophy in a blog dedicated to the world of micro-electronic packaging, not to say, also extremely difficult. Yet, when changes are occurring that are so profound, and having such a big impact upon day-to-day business practice, then, as they say, “needs must”. The level of significance to which I am referring is the kind of change that only happens once or twice in a thousand years. Events such as the Enlightenment, which in turn produced the Reformation, the discovery of modern science, the industrial revolution, the American revolution, and so on. Five centuries in, the Enlightenment reached its pinnacle in the Victorian age when it produced an era of effervescent, indefatigable optimism. The hope was, that despite occasional reversals, the human race was on an inevitable path to ever greater progress. It was Darwin’s Theory of Evolution applied to everything. (For this reason sociologists were to latter refer to it as “evolutionary optimism”). 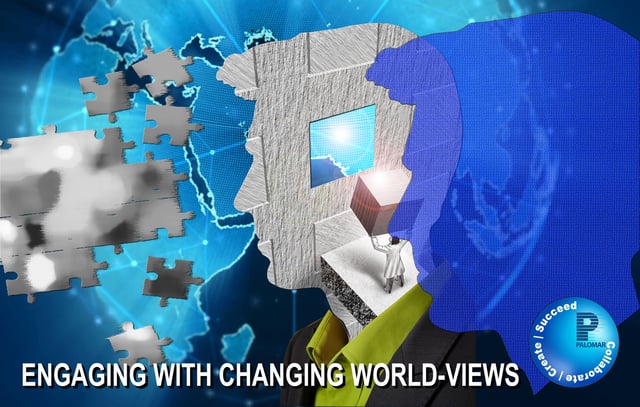 The First World War, however, left that ideology in bloody tatters. Thus, while ordinary people forgot the horrors of the European trenches by throwing themselves into the hedonism of the “roaring twenties,” intellectuals devoted themselves to destroying this grand unifying story of progress. Without a “big picture”, people’s ways of looking at the world became rapidly fragmented. The Rape of Nanjing (which eclipsed any horrors seen in the 1914-1918 war) left the Great Powers utterly indifferent. Whereas Victorian consciousness said, “What happens over there, affects us over here”, the 1930s turned that on its head. “What is happening over there, is happening over there”. Winston S. Churchill, on the other hand, utterly rejected this compartmentalization. His universe was a place where what happens “over there” always impacts the “over here”, whether individually, corporately, or nationally. Events proved Churchill right, but his ideals lost out.

Whereas, at one time, a moral scandal concerning a politician led to an immediate resignation, from the 1950s we increasingly heard the defense, “my private life has nothing to do with my political life.” Another word used to describe this “compartmentalization” is “relativism”. Unchangeable values which apply universally are rejected, replaced by subjective pragmatism. In short, collectively and individually, we make up the rules as we go along. Usually rules that suit us. Then we play around words to justify what we want (which in turn gave birth to the “sound bite”). That being said, there were always those thought leaders who resisted these changes and sought to undo them. (Some of them surprising figures such as George Orwell and C. S. Lewis).

In the same way that an unexpected confluence of events led the Enlightenment (beginning with the fall of Constantinople in 1453) so too the causes behind the current mega-shift; the essence of which is a return to a non-compartmentalized world-view. Unlike the middle-ages or the 1920s, this change is embracing the whole globe. Asia is affected as much as Europe and the Americas. Appreciate this ubiquity, and we can grasp why developments in Asia—and China most especially—are so much more than a mere shift in economics or politics. They are profoundly cultural. In an earlier blog we noted the U.S. media’s comment that “Chinese millennials are about to kick U.S. millennials’ butts.” Understand the current philosophical shift, and we can both grasp why it is happening, and understand that success is inevitable.

Fortunately, the complexities I have just described are finding their way into mainstream commercial thinking in simple, concise phases. Terms such as “millennials” “marketing 4.0” “consumer 3.0.” Each of these is not only indicative of the shifts I have described, but give us a real, down to earth, practical point of commercial engagement. This allows us to forget the philosophy and simply engage with the changes.

Changes in the way that businesses and markets are functioning, changes in the way consumers operate, changes in expectation. Contextually, this new world view is enthusiastically optimistic, but also insistently holistic. There is no “over there” versus “over here”.  Polluting the planet anywhere is unacceptable. More pointedly, “good machine” plus “poor service” equals “bad company”. The scale of the challenges is grasped when we understand, for example, that the new generation of buyers now expect Amazon’s level of service from everyone. “An on-line provider delivers a ten-dollar book next day, even on a Sunday, for my half-million dollars I expect …”. “I can log in anytime and see the status of my order … I can track the delivery truck in real time …”.

As our regular readers are aware, we at Palomar are already engaged with these trends, in part, because we listen to our own millennials, but more importantly because in our company the “voice of the customer” is the customer. Keeping up with these changes, and most especially ever rising levels of expectation, is not easy. Like an athlete, however, we get “pumped” by the opportunity to rise to “a new personal best” and meet each new order or new technical challenge with our best attitude, best efforts and best performance: “Helping our customers to be leaders in their fields”.