Interoperability Across Security, and Defense Ecosystems

“Necessity”, quips the proverb, “is the mother of invention.” Put colloquially, if you are desperate enough to attain a particular goal, you will find a way of achieving it. This is true, individually and collectively, as it is of internal or external motivations. By the former, we mean vision and drive; a man with burning ideals cannot rest until they are realized – in the world of engineering, a Brunel or a Ford, a Dyson or a Musk. By the latter we mean outside imperatives that threaten danger if no decisive action is taken to avoid impending disaster; current, all too real examples, find their pinnacle in climate change but not far behind the COVID-19 pandemic. In fact, the latter is one of those events that drives reticence and inherent conservatism from the mainstream and significantly eases the struggle for visionaries and pragmatists to implement their dreams. 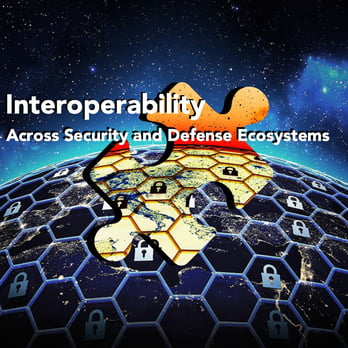 The increasing number of technologies critical to security and military needs being developed outside the classic coterie of defense contractors, was already pushing a more intense kind of inventiveness towards more normative boundaries. COVID-19 and the up ending of pre-2019 international order has amplified this, and released a more energetic competition. The result is a significant booster shot to creativity unparalleled in decades.

Apart from scale and ambition, a third element to come from this drive is inter-operability. The problem in discussing “interoperability” is that it has become a cliché receiving a great deal of lip-service but where basic elements often line up to kill it. A familiar example can be drawn from the world of personal electronics. From my box of variously branded connector cables, it is clear that at small, but critical points, the smart device industry collectively resists interoperability. Something is created around a device that makes a small but niggling inconvenience to work with other brands.

Using this analogy as an antonym, we arrive at the correct idea that “interoperability” refers to seamless use across numerous scenarios: arenas and theaters, situations and settings, hardware and software. As a grown-up lover of the toy, I call it the “Lego principle”. Lego can be used to physically realize conceptions across a vast range of possibilities, so numerous as to be almost limitless. I once visited the headquarters of a well-known German company where, in a very large display room, Lego replicas had been created of the final products where their technology was in use; particularly impressive was a large-scale build of the Effelsberg Radio Telescope (the world’s second largest) compete with motorized elements and lighting.

Of course, the very nature of defense and security operations means these sectors have always embraced a high degree of interoperability, but what has changed is the definition, scope, urgency, evolution and practical degrees of interconnectedness. This, in turn, has had a big impact on road mapping. Over the past five years, many advanced and hyper-advanced technologies have been part of ecosystems experiencing rapid convergence. This continues to offer new and interesting opportunities but also brings competitive threats and dangers (national and commercial). For these reasons, such challenges can no longer be met by simply doubling down on old approaches.

At the center of this convergence are rapidly evolving advanced algorithms that have true AI as their final destination point. Principally, this is because all critical devices now communicate with each other, with central control pathways, with human operators; all intensely interconnected, yet not nearly as complex as the computing power necessary to synthesize all this data and information into a practically effective—and necessarily failsafe—system. Sensors not only hold the whole thing together but also make the most critical of points:

Numerous sensors, using different technologies, producing widely varying types of data, need not only to be synthesized into a unitary coherence, but this must be done within microseconds—or better—and then communicated to other parts of the ecosystem; all inside close-to-zero latency parameters.

As a result of the current evolution in autonomous flight and drive, the number of technologies embraced, their complexity and interdependence will only increase over time, especially as utilized in military and security settings.

What we may term “quickening interoperability” is spread not only over technological integration, but also antecedently in concept and development programs, then prospectively to partnerships and manufacturing. Not only from sector to sector, but increasingly, nation to nation. Apart from the inherent nature of the technology, two other elements are fundamental in driving these trends:

If international co-operation among like-minded countries is one critical key to meeting the new decade’s challenges, intra-national co-operation is equally an imperative. More specially, melding military and security needs on the one hand, with the ability of the private high-tech sector to effectively and speedily provision these needs, on the other. Again, while this is far from entirely new, the scope, chronology and degree, are an entire order of magnitude greater.

Adding to the immensity of these pressures are three further factors; the need to think two or three decades down geopolitical timeline; the exponential speed in technological evolution; and the need to seriously factor in future “black swan” events. Vaccinations aside, the full reality of the viral pandemic has yet to play out.

If the attitude of the marathon runner served military development well in the past, today’s world requires an increasing number of “sprinters”, themselves running against a palpably more competitive field.

The reader will have realized that greater interoperability is but the logical outcome as regards the needs of inter-dependence in maintaining technological advantage, especially if the latter is to be sustained over the medium term. If re-shoring or stock-pilling essential components is one security path, components supporting many technologies represents another. Best of all are devices designed from scratch to operate across a range of arenas, or that can effectively substitute one technology for another. This may seem a simple rule for future development, but in many areas, it is not actual practice. The current pandemic has revealed a systemic and stifling bureaucracy on the one part, oblivious but sclerotic attitudes to change, on the other. Numerous defense reports published over the past twelve months have both highlighted these and set pathways to change.

Among leading military contractors, a number of these impediments were vigorously tackled in 2020 with more on the horizon for 2021. The challenge for established SMEs is to follow in their example; for start-ups and advanced tech sectors, such agility is the warp and weft of their business structure, for others the need is for assessment and engagement. While providing/servicing legacy technologies will remain a commercially valuable part of the defense sector, their future is inextricably linked to the evolving paradigm we have just described.

As we consider the future, it would be a mistake to limit our understanding to science fiction like scenarios. Oftentimes the most critical element behind commercial and technical success is not the equivalent of splitting the atom, but the application of a solid bank of knowledge and experience, clear thinking, efficient communication and common sense that gets us to the next step. While holding on to what works can be important, ruthlessly testing the uncritically accepted is a necessary counter-weight.

The “low latency” business model represented by Palomar’s Innovation Centers has been specifically developed to embrace these qualities but also meld them with a high degree of commercial cognizance. Our Engineers function in an interdisciplinary setting allowing our customers to work with us in order to co-create effective and timely solutions to packaging challenges; from new approaches to legacy technologies, to banked experience benefiting new device construction. Such qualities, already essential for effective development, are now critical a-prioress in sector-wide step-changes developing next gen interoperability security and defense devices.

China's National Defense in the New Era. The State Council Information Office of the People’s Republic of China, July 2019.