Developments in Undersea Fiber Optics and Packaging – 2022 and Beyond 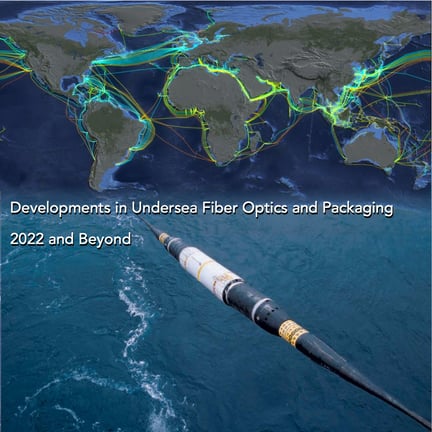 The window from Palomar’s UK Innovation Center top floor office looks towards the Cornish coast, not too far from where Google’s Grace Hopper cable connecting New York to London, recently came ashore. At 4500 miles in length, it delivers a massive capacity uplift and, once up and running in 2022, will offer a record-breaking speed of 340 terabits per second. A private cable, with highly secure connection, it adds to several others recently laid by the various tech-giants, including the Dunant cable, connecting Virginia Beach with France. Indeed, the two equal the capacity of all earlier transatlantic cables combined. Combine these with the Curie, linking Chile with Los Angeles, and the Equiano, connecting Portugal with South Africa, and these represent tens of thousands of kilometers in undersea cables.

Looking to mid-decade, Google, Facebook and others are collaborating on two further undersea ventures bridging North America, Indonesia, and Singapore. Dubbed “Apricot” it will also join Japan, Taiwan, Guam, and the Philippines, collectively increasing cross-Pacific capacity by 70 percent. The 2024 2Africa project at 37,000 km will represent the world’s longest single undersea fiber cable. Not quite as ambitious, but equally as significant, will be completion of China’s digital/undersea Silk Road initiative.

To those familiar with the exponential rise in data demand—the COVID digital shift and the future requirements of mm/w 5G in-particular—these ambitious projects are no surprise. The figures represented in Table 1 certainly reflect this fact, as it does the reality that underwater cables still transmit data more cheaply, quickly, and reliably than satellites.

Historically speaking, undersea communication is nothing new, with the first transatlantic telegraph link being laid in 1858, and its fiber equivalent 130 years later in 1988. Since that time, optic technology has advanced considerably pursuing a relentless path of greater transmission speed, signal quality and bandwidth. Indeed, it is the only medium that can meet the needs of an increasingly diverse and rapidly changing ecosystem, while simultaneously meeting the demands of lower cost and greater power efficiency. It took sixteen and a half hours to transmit the ninety-eight words Queen Victoria’s telegram to President Buchanan in 1858, some 980 bytes, a startling 8.91×10-10 Terabytes slower than it would take today via Smartphone.

This mind-boggling order of difference points to the change in the underlying physics being exploited, shifting down the elector-magnetic scale from electrons to photons. If, in principle, manipulation of the latter offers orders of magnitude advantage, it also faces new challenges; light through fiber suffers from the disadvantage of degradation over distance. Thus, in order to maintain speed and capacity, these optical cables require a number of repeaters, or more accurately, optical amplifiers, which boost the signal along the length of the cable. Like everything else connected with the ecosystem, these devices have been improving over time, advancing from electronic regenerative-repeater technology at every 70 km before 2000 to optical amplification at every 100 km or better, with the new advent of the new century. From an optoelectronic perspective the latter are similar to their terrestrial counterparts, with the major difference that these are installed in one of the harshest of operating environments known to man—several kilometers deep on the ocean floor.

Adding all this information together and it becomes self-evident that the number of these devices is large, and the requirements for dependability and redundancy are extremely high. As the adage goes, “a chain is only as strong at its weakest link”. For packaging technology developments, the implications are clear. With optical amplification components required in the tens, if not hundreds of millions annually, commercial opportunities are lucrative, as is the commensurate pressure on substantially improving reliability, reducing yield waste and thus lowering overall real costs. Reduced carbon footprint, of course, ties in with this as an ever more critical metric.[1]

Palomar’s global Innovation Centers are actively working with partners across the globe developing next generation prototypes aimed at meeting these requirements and more. The skills utilized are diverse, and include working through the age-old “rubrics” challenge; aligning one set of critical parameters (physical or material) only to discover others have become compromised in the process, that or gaining “x” with automation then discovering problems with “y”. That packaging developers are busier than ever within this, and related photonics ecosystems, is indicative both of pace of change, and the rewards for timely success. If in some scenarios it is said, “It is not what you know but who you know”, in this arena it is definitely a case of “what you know”. Rooted in the Hughes Aircraft corporation, but aligned with contemporary technology leaders, Palomar brings a vast bank of knowledge to an expert use of our own machines and processes—including hermetic sealing—allowing for unparalleled, agile synergy, in working with customers to solve not only these undersea optical amplifier packaging challenges, but also many other next generation devices.

[1] This must be understood in a holistic sense as including power used in manufacturing and saved in reduced waste, to give but two examples.