In the blog, we review some of the theoretical principles in exploiting light for diagnostic and therapeutic uses in healthcare, and in treatment of cancer in particular. Thereafter, we consider some of these emerging technologies, together with the broad requirements to be negotiated in developing the required prototype light engine packages that will lead into the early stages of manufacturing. Thirdly, we review the very practical issue of labor shortages that are increasingly frustrating these processes. Finally, we consider why third-party assembly service solutions (OSAT) are both valuable against these and other negative trends challenging the ecosystem. 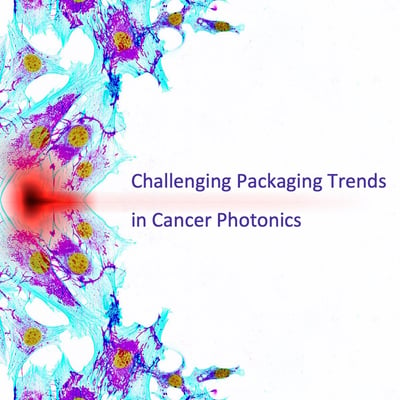 With the harnessing of electricity at the end of the nineteenth century, light and optic manipulation techniques started to make a profound impact on medicine. Clinically successful use of x-rays was already relatively widespread by 1900, and early triumphs were recorded in photo-therapies such as the use of ultraviolet (UV) to treat skin lesions a few years later. The development of lasers in the 1960s unleashed a second wave of light-based therapeutic and diagnostic devices, that, with growing cost-effectiveness, are now routinely used in clinics around the globe. In the past five years especially, a series of advances have enabled the development of yet more sophisticated devices. At the same time contemporary advances are iterating with earlier invention leading to radical steps in advance over the original use. It is often overlooked, for example, that CT and PET scans are just an evolution of x-ray/gamma-ray technologies, while MRI is consequential to advances in radio waves and magnetic field sciences. Moving into the 2020s, we are on the verge of integrating photonics with nanotechnologies, quantum technologies, meta-materials, biomaterials and genetic engineering.

In terms of exactly how light technologies can be manipulated for diagnostic and therapeutic applications, respectively two physical properties are exploited. Firstly, the way in which photons are either absorbed or scattered when interacting with human tissue (or indeed, any biological cell) which can then be subsequently mapped out for diagnostic imaging. Secondly, the way in which light can be directed to excite various effects on these tissues and cells. These can be either photo-thermal or photo-chemical in nature, either way, when carefully controlled, they are therapeutic. Critical to enhanced efficacy is the ability to more and more precisely manipulate wavelengths and target them at light sensitive molecules already present in the human body, or via sensitivities created by gene-editing.

The potential benefits of this kind of manipulation can be confidently speculated because they are already present across a huge spectrum of non-human and plant life in the form of bioluminescence, iridescence and photon sensitive crystalline structures, where they have secured successful evolution, survival and continued adaption. Thus, it is no surprise that many of these represent starting points driving forward a number of laser and optical technologies into advanced and specialist health care.

Taking the natural world as their instigator, scientists are developing meta-materials and nanoparticles that allow only diseased cells to be targeted for laser or radiation treatment, having been previously identified by light-based none, or far less invasive, molecular profiling. The benefits the optimal spatiotemporal application in chemotherapeutic treatment can significantly improve efficacy and lower the likelihood that tumors metastasize, and for this reason, raises the profile of developing, then delivering, nanoparticle materials to the targeted area alone. Even more remarkable is the potential for utilizing light-controlled, nanoscale, swimmer bots to undertake precise, non-invasive[1] surgeries.

The flip-side to these therapeutic values are reduced side effects which in terms of other cancer treatments such as chemotherapy can be both be significantly detrimental to healthy cells and extremely unpleasant to endure.

From what has been said so far, it is clear that the precision, power, wavelength/color and delivery versatility of light determine the diagnostic and therapy efficacy of the process. In terms of the device, there are a number of critical components, the most foundational of which is the light engine. Though, as will be seen in a moment, the latter ought more accurately to be referred to in the plural. The ability to deliver multiple wavelengths requires, either the use of a tunable laser, or several DFB laser bars[2] of individually fixed, but collectively differing, wavelengths and power. The former has the advantage of reducing the laser inventory required in the device, the latter, significantly reduced packaging complexity and increased reliability as a ratio of packaging ROI. One of the critical determinants as to which is used, other than cost, is space. The former is much more compact, and particularly suited where space can be at an extreme premium, such as in aerospace and defense scenarios, or to a lesser degree, even as a transceiver in a data center. Where space is not an issue, the use of laser bars offers significant advantages both technical and commercial, but especially when it comes to device packaging.

Reduced component numbers, structure complexity and absence of moving parts all make for more straightforward manufacturing using extant and proven methods of pick and place micro-construction , eutectic die attach, and gold thermosonic ball bonding. Although these devices are at the beginning of their maturity cycle and potential development forks in the road ahead—as they especially do in regards their use to fight cancer—their advantages are so strong as to verge on the axiomatic.

The final definitive must be as regards the fact that the medical use of lasers in the treatment of cancer is very much in its infancy with much still to be discovered. Add to the this the level of urgency with which effective treatments are sought, and the technical value of devices and device packaging that is both straightforward yet possessing inbuilt flexibility, and the synergy is complete. No wonder the sector is enjoying high levels of investor attractiveness. That having been said, there is a non-technical, but increasing hinderance to implementing solutions otherwise pragmatic, financed, and at hand.

Analysts have been warning of general labor shortage among developed economies for well over a decade, and of appropriately skilled engineers and technicians, in particular. There are four principal causes. Demographic shifts, meaning not enough people are entering the workforce to replace those who are retiring. Long-term educational choices away from “harder” subjects, resulting in a shortfall of appropriately qualified workers. Thirdly, a sharp increase in demand for precisely these skill-sets. Finally, some areas have seen a rise in better paid career alternatives. A mixture of COVID and geo-politics has significantly amplified these trends. The health sector is especially affected as post-COVID there has been a sharp rise in demand for advanced treatments for cancer and other serious diseases which failed to be diagnosed during long periods of lockdown.

The Palomar Innovation Center is seeking to soften these challenges. By working with partners to better direct our common know-how to tackle the issues at hand. This begins by drawing from a knowledge-bank based on device development from nearly 5 decades, then exploiting the high flexibility, wide tooling range, and diverse handling capabilities of Palomar systems to solve the packaging issues in readiness for manufacture. What is new, and under development, is rigorously pushing our long history of drawing the shortest possible line between machine and ease of use, to better align to today’s operator, simultaneously rooting out potential problems that could require engineering intervention later on. A rapidly changing world, and the direction of that change, increases the importance of these efficacies still further. This is not magic, simply a more exactingly designed process, intended to better anticipate—and sidestep—what could go wrong. For Palomar as a company, such workforce centricity unambiguously sets the path of further commercial development, meaning we will work more tirelessly than ever with our customers to ease the solutions journey through improved capability, reliability and operability.

[1] Outside the medical community, it is little appreciated the potentially significant negative impact evasive surgery can have on the human body, hence the urgency in developing these alternatives.