“New space technologies … will bring about fundamental change that will influence business and our personal lives.”

In the first part of our A&D assessment for 2021, the reader’s thoughts were taken mid-decade, and beyond, to a world shaped by post-pandemic realities; aerospace and defense technologies that are leaner, greener and more agile, themselves rooted in the new approaches, expectations and expeditions demanded by the COVID-19 pandemic. 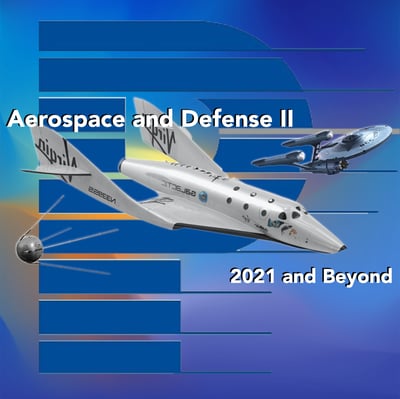 It is 2025 and you exit the first-gen hybrid-electric and hydrogen fuel-cell aircraft at LAX, having UBER’d an electric air taxi to take you to Santa Monica. As you journey, you mentally note the rapid development of the local air-mobility network, supported by a vast range of failsafe sensors and the latest artificial intelligence (AI) algorithms. As they speed by, you reflect on how drones are now commonplace in delivering packages, vaccines, defending our shores and protecting people and infrastructures in everything from natural disasters to terrorist threats.

Your flight from London allowed you to work on the practical assignments for your advanced degree in digital engineering, utilizing the vast bandwidth and hyper speeds of 6G connectivity powered by laser relay technologies and ultra-high speed satellite data transfer hubs. After the in-flight lunch you continued work on designing a military CubeSat assured of the total security provided by quantum encryption, simultaneously printing the necessary components that via a raft of XR devices. Having negotiated with your colleagues you collectively plan the use robotics and AI to meet the demands of incredibly tight tolerance requirements.

Sixty miles above this hive of mobile industry is the silence of space where another technological revolution has been unfolding; beginning with “New Space”, the growing number of private spaceflight corporations, from Musk’s SpaceX to Branson’s Virgin Galactic. You recall how 2024 saw SpaceX’s Starship first return journey to Mars. Payloads are already being delivered to the moon to pave the way for the first permanent human base station. Plans are now seriously afoot for the first Mars manned mission.

Simultaneously, next generation satellite broadband and advanced GPS systems facilitate the growing network of self-drive craft (from taxis to fighter aircraft) to a vast swathe of advanced monitoring, to individual remote biomedicines and safety devices.

If lives are saved and great strides in commercial efficiencies provide some of the benefits of these advances, others include unprecedented growth opportunities for the developing economies (as previously expensive infrastructures are by-passed) greening for the planet, improved personal health, the development of new material and compounds (we remember teflon) but—and there had to be one—at the cost of unparalleled dependency on this highly evolved and interconnected digital infrastructure.

Which brings us to the subject of space security. International treaties, secrecy, denial and the very nature of espionage, mean the subject is clouded in fog and deliberate obfuscation. Notwithstanding, the urgency of being prepared in these areas are self-evident given the dependencies we have just described. Such preparedness needs to be both reactive and proactive. Reading between the lines and integrating key points of knowledge (“joining the dots”) allows quite a definitive list to be drawn up of the types of satellite defense activity currently being developed:

Ballistics cover the more overt type of weaponry being developed for use out-of-atmosphere. Rooted in the cold war of the 1970s and 1980s, initial projects faced huge technological hurdles most of which were not overcome at the time. Moral scruples and international agreements notwithstanding, the rise of space capable rogue states, the sharply decreased real cost of space programs, the new post-COVID international order, and growing economic competition, all meld with the technological vulnerabilities just mentioned to make a total absence of activity within this domain an extremely unlikely scenario.

Satellite warfare addresses the interruption and assault on all aspects of utilitarian, security, communication, GPS, tactical and military functioning of earth orbiting devices. As stated, effective disruption here would prove disastrous. The degree of practical and psychological harm, logistic and social breakdown, are hard to exaggerate. For this reason, it must be assumed that national agencies across the globe are developing highly mobile “microsats” and “picosats” agile enough to interact with other orbiting objects to repair, sabotage, hijack, or simply destructively collide with any threatening craft/projectile.

Kinetic assault includes the extension of conventional weaponry into out-of-atmosphere deployment and back into terrestrial theaters. While these could include nuclear and other explosives, (despite treaties banning the former) the projectile force alone would cause massive damage—thus providing a cheaper, effective and almost failsafe weapon. While there is no evidence that such technology is currently being developed, the very fact that it can be envisioned speaks to the probability of its development.

Directed-energy weapons. In varying degrees, these already exist as ground based devices utilizing lasers. More sophisticated orbiting devices would potentially embrace particle beam, microwave and plasma-based technologies. The former would use a high-energy beam to damage the target, for example through electrical disruption or destructive overheating. Currently such devices are only effective in outer space against other orbiting targets, but development is apace to develop potential terrestrial effectiveness. Notwithstanding, severe technical obstacles have yet to be overcome in terms of sourcing the very large amounts of energy required to make these work.

Quantum technologies. It has been said that if quantum theory does not strike one as unbelievable, then it has not been understood. The physics of superposition in which all-possible physical states occur simultaneously, and not one or the other provides the basis of quantum computing. The collapse of the superpositioned state, once observed, provides for one of two options for quantum encryption (the other is entanglement); in either case it is impossible to eves-drop without being instantly found out. Quantum entanglement also opens the possibility of sending infinite amounts of information, across infinite distances, infinitely fast; no infrastructure required beside the quantum field itself. Not only are all these technologies being currently developed, but much of the work is being done in outer space; much of it using satellites. We especially note the successes of China’s Micius (墨子) program in furthering both quantum encryption and quantum communication technologies.

While the five categories listed above embrace varying degrees of immanence, as a whole they faithfully reflect the direction and ambition of space defense/non-defense technologies, as, most certainly, our opening paragraphs do of terrestrial innovation. If most of the latter were already anticipated as having a place somewhere on the development horizon pre-2019, COVID-19 and its various impacts have created a significant up-shift in expectations, investment outlay, and roadmap planning. Many elements of previously quiet technological evolution have now jumped the line to become imperatives. To quote one leading global newspaper, “COVID has shaken the world to its core with political, economic and business repercussions that will last for decades.”

The result is a new “anti-fragile” pragmatic that embraces unpredictability; a huge shift in approach that will impact business behaviors; not least technological goals, development processes, manufacturing protocols, and how these three elements are inestimably linked to perceptions and changed responses to a era of new geo-political and trading realities. The result for aerospace and defense is:

For SMEs, much of this distills into three elements of business reorientation; smarter working practices; digitization; and changed approaches to product development. None of this is wholly new, but it does bare some semblance (at least by analogy) to the concept of “evolutionary jump” where a species undergoes such a degree of change that it is markedly different from its antecedent; so much so as to be phylogenetically unrecognizable. This is what happened in World War 2. Urgency and survival drove hitherto unbelievable changes. It was also consequent to the “Sputnik moment” without which the US would never have profoundly reoriented to successfully pursue the Apollo program. Big challenges when they become supremely urgent lead to big changes.

While the aerospace and defense media reflects significant commercial gloom and a sobering recognition of the impact of the pandemic, it also identifies that appropriate response has driven a new level of clarity that all these challenges can not only be successfully traversed, but hopefully unleash new levels of determination and inventiveness.

While Palomar’s vision does not extend to colonizing Mars, significant investment has taken place in founding and developing our three Innovation Centers in the US, UK and Singapore respectively. While each center has been designed to engage with the local tech ecosystem, all are driven by the same commitment to optimal packaging solutions, whether for legacy technologies or (for example) optical components for next generation satellite communication or quantum security. Future blogs will bring our readers insight into some of the activities we have recently undertaken as practical examples of where we can continue to successfully engage with existing and new customers in these and other demanding packaging challenges.