Our opening graphic contains three illustrations. Moving from left to right, these are respectively those of 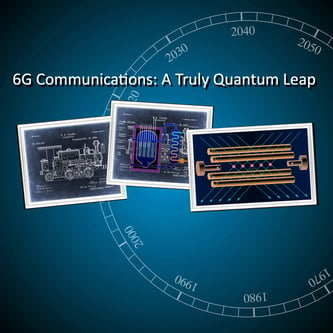 a stream engine, a nuclear reactor and the properties of quantum cubits. The latter is offset to the right to underscore the fact that in terms of the manipulation of physical laws, qubits represent an entirely different order of science. It is too easy to forget that a nuclear reactor is just another steam engine, just turning a turbine instead of wheels. Quantum manipulation, however, moves us away entirely from the laws of classical physics allowing us to do the “impossible”.

This understanding allows us to see that 6G is the beginning of a truly remarkable communications evolution. “Beginning” because it mixes earlier optical data transmission with quantum elements, most particularly, in the form of encryption and across a range of sensors/other devices. The advent of true quantum computing (which uses these qubits) will, however, drive the entire network into next level quantum exploitation, if for no other reason than this is the only way these computers will be able to network and communicate. As we shall see, however, quantum processing, and the AI which it facilitates, will prove both fundamental and essential. Think of it as the “rails” and entire “signaling” infrastructure that makes the whole thing work, but in the form of a perfectly efficient, hyper-speed communications network. 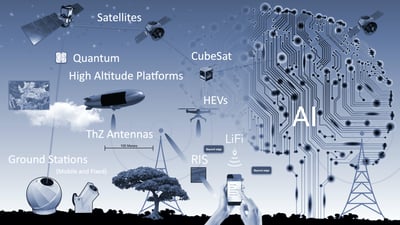 The exact nature of this infrastructure is important to grasp, as it is, in many ways, the defining element of 6G. The most fundamental difference with earlier generations is that it is dominated by the free-space optics necessary for quantum connectivity, and, as a result, excels the capabilities of fiber and current frequencies of transmission in the same way that railways supplanted waterways during the industrial revolution. If the latter were dependable and cheap, the former proved cheaper, more dependable and (for the Victorians) mind-numbingly fast[1] and, finally, within a very short space of time, ubiquitous.[2] Leading developers in the field of 6G expect parallels here. In terms of practical impact, Samsung, for example, expects the network to connect 500 billion devices, up from 10 billion in 2020.

Figure 1 also indicates the areas of principle challenge; severe path-loss, atmospheric absorption, physical obstacles; RF front-end, photonics and data conversion; meeting the demands represented by new waveforms, signals, channels, and protocols. Collectively these will be met through hardware and software solutions. AI and machine learning will be critical, for example, to compensate for atmospheric interference, and bottle-beaming technologies to work around physical obstacles in line-of-sight transmission. ThZ antenna, lens, and beam-forming architectures represent additional series of challenges, not least in design, packaging and volume manufacturing.

If there is no understating of the difficulties, the rewards are difficult to overstate. By way of illustration, Figure 2 sets out the tremendous strides already made since the advent of 1G in the 1980s, together with what we can expect to gain from 5G and 6G; respectively then, latency of one-five hundredth and one five thousandth of 1G, and data speeds, one hundred thousand and one million times faster and (as already noted) from 10 billion to 500 billion connected devices. What is so easily overlooked in these dizzying numbers are the completely new technologies these advances enable, that otherwise would be wholly impossible. What we so casually refer to as the Internet of Things (IoT) yet they would have been beyond belief in 1980. Equally then, we only have a very partial sense of the full range of applications that will be enabled by 6G. If there is much that is speculative, fortunately, for those participating in the development of the technology, there is much that is already known.

At the center of these certainties are the two eclipses of power consumption and security. A recent editorial in The Irish Times warned that at current growth levels, 70 per cent of the nation’s electricity production will be consumed by data transport and processing.[1] Clearly this is unsustainable. The good news is that energy reduction has been a defining element of each successive stage of communication evolution. 4G networks are roughly five times more energy efficient than 3G, and 50 times more efficient than 2G. 5G savings are still uncertain, but will probably be in the range of a 20 times improvement over 4G. 6G will carry this forward.[2] What may appear to many as a mystery of achievement, is well known among material scientists, namely that utilizing inherent material properties such as conductivity and band-gap, or other “tricks” such as atomic layer deposition, manipulated meta-materials and meta-surfacing, can all be utilized to secure power efficiency and reductions in size. It is all a case of allowing material changes—and the manipulation of electromagnetic forces these permit—to direct the evolution of these devices. The implications for packaging technologies will be further addressed towards the end of this blog.

The second issue is security. The problem with billions of interconnected devices (including autonomous drive vehicles and robotic surgery) is that any could be potentially the backdoor to the other; hacking into the robopet intended to guard your home, could unlock your front door. Protected however, by quantum random number generators (or other quantum devices) the ill motivated will be frustrated. A second-generation quantum encrypted smartphone is already on the market utilizing technology that is 2.5mm square and that captures truly random noise[3] with an LED and a CMOS image sensor.

The third element is power by which we mean energy sources for the devices themselves. ThZ transmissions have the potential to charge smart phones and operate a plethora of IoT devices that have no inherent power sources. The benefits are obvious, as are the vast number of challenges this solves (no batteries needed).

These three factors unambiguously set the parameters of the roadmap to which these and similar devices are all pointing to as-yet-to-be-developed devices at lower cost, using very little power yet providing failsafe security.

Integral to these three points are the challenges facing practicable, commercial device manufacture. Figure 3 presents both a simple schematic of for a ThZ antenna and a wholly new approach using graphene (100 times smaller[1] and using considerably less power) proposed by a European research team. Set side by side, we see that developing the device is in the very early stages, despite being one of the backbones of 6G delivery. Power is not the only challenge. As was illustrated in Figures 1 and 2, 4G transmissions have a radius of 10 miles, but operating at much higher frequencies, 6G will at best reach 100 meters, if that. Furthermore, the beam steering technologies necessary for mm/w 5G to attain optimum broadcast, will need (as we have already noted) to be improved significantly for ThZ transmission. There is no doubt it can be done, but the journey getting there will involve a lot of trial and error, all amplified by a growing number of provable material options. The first stage will be to create a working antenna prototype, something as of the time of writing still alludes us.

For packaging manufacturers, the deductions of this wide-ranging narrative are clear. The free-space optics infrastructure, the number of devices, the need for security, the development of non-cryogenic qubit processing capabilities, the very array of new/meta material options, all distill into the need for vast numbers of photonic devices, lenses, mirrors, plasmonic processes and more. The requirement to use new materials, or combination of materials, to meet power requirements, as well as smaller packaging, all underscore many construction challenges. Fortunately, we know in advance two critical sets of parameters for initial development. The first concerns our starting point. We begin with tried and trusted legacy technologies. Secondly, that the (packaging) goal is to develop these into a common passive platform that can be easily transferred to a state-of-the-art fabrication facility, at multimillion per annum scale, which itself would be based on wafer scale heterogeneous photonic integration and CMOS compatibility. Easily stated, so very much harder to achieve.

Palomar Technologies, with over four decades of experience developed a number of these now legacy approaches which gives us a unique vantage point in participating in the 6G revolution. Added to which through our three global Innovation Centers we are already working on a number of early-generation prototypes. Further details on options within this, and other technological ecosystems, can be found here.

[1] Like today, they were also faced with conspiracy theorists. It was said that traveling at speeds greater than 30 mph would cause passengers to go blind or make them unable to breath and make animals in adjacent fields infertile.

[2] That first railway journey between two English towns in 1825, morphed into 100 million journeys across a nationwide network by 1850, a mere 15 years later.

[5] Classic devices are incapable of generating unpredictable and patternless true random numbers which makes them susceptible to hacking.